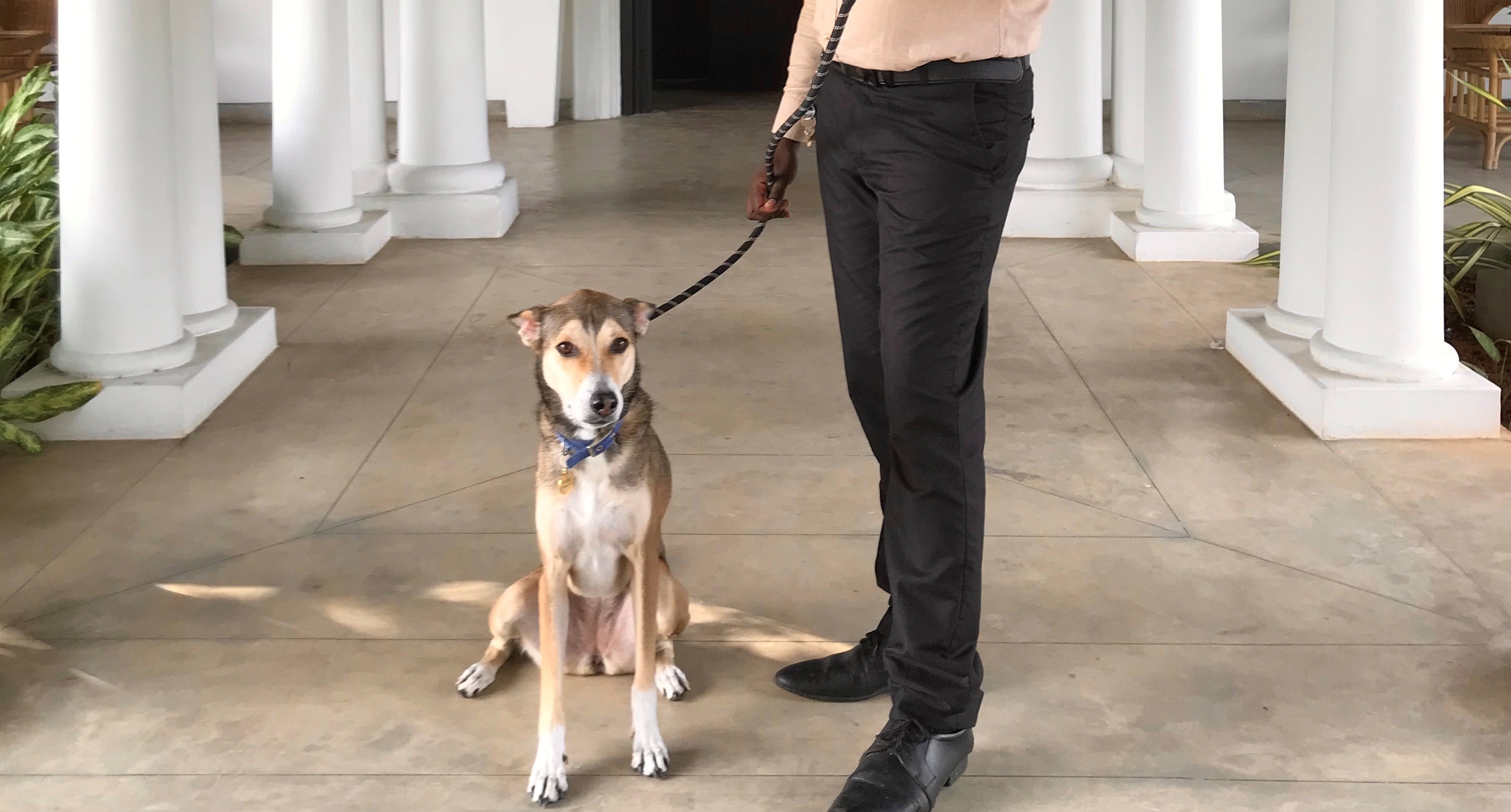 The furthest we had ever taken Katie was to Kalpitiya. The journey averages five hours with three to four bathroom stops, and a vomit stop or two.

When we initially planned a five-day family trip to Jaffna and Kalpitiya, we decided to keep Katie behind. Our group of six included three 75+ year-olds – it seemed a great enough effort to just get everyone on the road! Even though both hotels we booked were pet friendly, we thought nine hours on the road was just too much for our nervous little Katie.

The night before the trip, Katie sensed that we were leaving her, and seemed very sad. When bags were brought out, her head dropped down and eyes drooped lower than ever before. It was my husband’s heart, really, that broke, and we called the van driver to ask if we could bring her. Being an animal lover himself, he sounded quite excited and readily agreed to the furry stowaway, as long as we cleaned up after her.

We then spoke to Glen Palliyeguru, General Manager of Fox Jaffna, who was delighted to have a canine guest, even on short notice.  Of course, we had to send in a copy of her vaccination book in advance, and fill up a thorough questionnaire on her behavior before she was allowed to visit.

We took off at 5am, laying out Katie’s usual car seat protective tarp on the back seat, and left her bed (which we take when we travel with her) on the floor of the van. She started off on the seat, and then quietly crept into her bed and slept peacefully.

Two hours into the journey, we took our first bathroom stop – surprisingly, at my father’s request and not for Katie’s requirement! When the dog was brought out of the van, the oldies looked at her with surprise, and said they had forgotten that there was a dog in the van with us! She remained calm and slept almost all the way to Jaffna, curled up in her comfy bed and only getting up whenever we stopped at the request of one of the other passengers, or to casually ask for cuddles from one of us.

Many hours later, we arrived at Fox Jaffna, a pet friendly resort owned by the Capital Maharaja Group. As dogs are not permitted in the  reception area, we took the side route directly into the gardens. There were no other dogs in the property, so Katie had the flexibility to come out whenever she liked. There were, of course, a few house rules that ensured other guests weren’t disturbed – we had to keep her on a leash at all times, clean up after her, and dine on the verandah of the restaurant rather than inside, but this was no different than what we usually do when we take her to a Colombo restaurant. Although we had already brought our own, the Fox Jaffna staff were up to their normal stellar service, and surprised us with a bunch of cleaning necessities without our having to ask. Katie loved the food on their special Pet Menu, and we even got a pack of Let’s Bite dry food to carry with us on the return journey.

Being a gregarious dog with a sheer, unqualified love for friendly strangers, Katie marched right up to various staff members with a wagging tail and ears pinned back with glee, and was amply rewarded with loads of petting and photo ops. Whenever the staff were too busy for her, she retreated under the table and slept like a baby!

Even sightseeing was a breeze. Being an ardent dog lover, our driver was happy to take her on various strolls whenever all of us went to explore a tourist attraction together.

On our return trip to Colombo, we made a two-day stop at Anawasal, a serene yoga and kitesurfing resort on the Kalpitiya lagoon. As the owners have their own dogs on the property, and Katie doesn’t get on well with anyone other than people and cats (she is, admittedly, a strangely quirky dog), we had to stick to a schedule where she was allowed out for 4-6 hour windows with the few dogs she liked. When one lot of dogs are out, Anawasal’s staff make sure the other lot are kept in their rooms.  This suited Katie just fine when it was her turn, as she was exhausted from running around and playing –something an only-dog loves to do. The resort doesn’t restrict the dogs to being on a leash, so each group can be free to roam in the fenced property, exploring the coconut trees and digging the sand whenever it is their turn on the play-and-cuddle roster.

The Anawasal staff simply dote on guest dogs, treating them very much like paying guests. They go out of their way to cater to the whims and fancies of each dog, and make endless exceptions to the roster to give guest dogs more time outside. The hotel’s dogs don’t even seem to mind.

When we finally returned home, Katie took a few sips of water and simply collapsed on the couch, exhausted from playing and happy to be in her favorite spot.  It was, for us, a much more relaxing trip, as we had our four-legged companion in tow, and weren’t wracked with guilt at leaving her behind.  Having Katie on the trip also fostered a tremendous amount of bonding with our family, as many of their needs had to be organized around Katie. Perhaps it was her angelic face, or the fact that she was a playful member of an already vociferous family, but our little girl brought a sense of tranquility, empathy, and humanity to our family vacation.

In our family, dogs have always been as important as humans, if not more. Our little family vacation introduced us to so many people who feel the same – from different parts of the country, and from all walks of life. We cannot recommend enough the experience of traveling with your dogs.

A few tips will serve you well – carry your own doggy bed, towels, a large sheet to cover the hotel bed, food bowls and some treats. The sense of familiarity really helps them settle down into the new place with new smells, which can intimidate some pets. Do not travel with cats, unless they are seasoned travelers from a young age. Cats generally find it difficult to orient themselves with a new and unfamiliar places, and often run away and get into accidents. Keep a water bowl and a large water bottle with you at all times, along with emergency cleaning supplies.